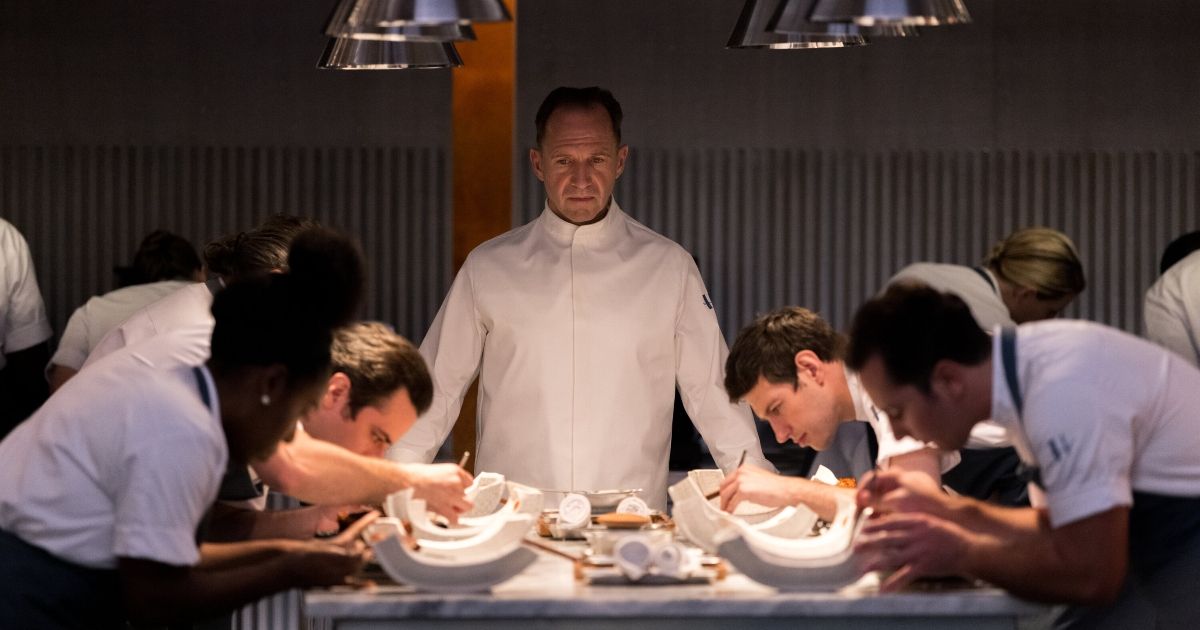 This article contains spoilers for The Menu.The Menu is a dark comedy horror film that was released in 2022 to great critical acclaim. The film tells the story of a diverse group of wealthy food enthusiasts who are invited to attend a special dinner on a remote island curated by world-famous chef, Julian Slowik, and his personal culinary team of devoted acolytes who are willing to do anything for their leader.

What starts out as a fun albeit pretentious night soon turns into something much darker, as Slowik reveals that his specially selected group of attendees are going to be a part of the evening’s course in various ways. The Menu works as an allegory for the tortured artistand it would be interesting to explore how many parallels Slowik’s journey through the movie has with the current state of commercial cinema.

The Chef is an auteur filmmaker

Upon seeing the initial trailer for The Menumany thought the movie was going to be about a crazy chef who cooks and serves human beings at his restaurant. But chef Julian Slowik’s intentions are revealed to be something else. Slowik has created his supreme artistic achievement — a dinner menu that emotionally and thematically connects his guests with his own culinary journey, and the food that binds them all together.

In this sense, Slowik is not just a chef but a storyteller, and the menu that unfolds that night in his restaurant is the greatest story he will ever tell. Consider Slowik as an auteur filmmaker who wants to make his best movie ever, and the only way to make that movie is to deal with each of his guests individually that night, each guest representing a different obstacle faced by filmmakers trying to work in Hollywood.

The Food Critic Is a Movie Critic

One of the guests Slowik personally invited to his restaurant that night was Lillian Bloom, a prominent food critic who has known Slowik for a long time. Their long association and her elitist culinary knowledge leads Bloom to assume she has a special connection to Slowik and his menu. All through the evening, Bloom tries to decipher the meaning behind Slowik’s menu based on her knowledge of the high-class culinary world.

This is similar to how movie critics try to break down and understand the works of auteur filmmakers. And often just like Bloom, movie critics are unable to understand what is truly going on in the filmmaker’s head whose work they are trying to decipher. Bloom assumes she and Slowik are on the same level mentally, but the movie makes it amply clear that the critic can never truly appreciate the depth and richness of the artist’s work armed only with their academic knowledge and snobbish biases.

The Investor Is the Film Studio

One of the worst things Slowik does during the course of the evening is killing the man who had invested in his restaurant during the Covid pandemic. The fact that the investor had helped Slowik keep his business going does not stop the ruthless chef from drowning the man in front of his horrified guests for the crime of taking ownership of Slowik’s restaurant.

Here the investor represents the movie producers that filmmakers are forced to work with in Hollywood. Since the filmmaker is working for the studio that funds their work, they do not own the rights to their own stories. In order to make his greatest story through his menu, Slowik had to kill his investor and reclaim control of his restaurant and his artistic identity.

George Diaz Is the Movie Star

Another of Slowik’s guests is George Diaz, an aging movie star who is past his heyday as a leading man but is still desperately trying to hold on to relevance in the eyes of the public. Slowik informs Diaz that he was chosen to die because Slowik had once had to suffer through a mediocre film starring Diaz on his rare holiday, which had spoiled Slowik’s mood for the entire day.

This reason might seem petty, but the whole thing takes on a new meaning if you think of Diaz as a lazy movie star that an auteur filmmaker is forced to work with due to the dictates of the film studio. Many promising movies by filmmakers have been ruined due to the studio forcing them to use miscast movie stars instead of lesser-known but more suitable actors to drum up interest among the public. Diaz is the kind of star who does bad films to make easy money, and there is no place for that kind of an artist in Slowik’s worldview.

Soren, Dave, and Bryce are a trio of employees at a big firm who make for unusual guests at Slowik’s restaurant. The three are obsessed with money to an unhealthy extent, and they are revealed to be embezzling millions of dollars from their own company. They also have an arrogant nature and assume themselves to be VIP guests because of their financially prominent status.

Here we have parallels to the obsession with money and box office that consumes so many internet critics. There are entire online forums dedicated to breaking down and analyzing every film’s box office performance. By their criteria, any movie that fails to make enough money is judged a failure regardless of its artistic merit. The worst part is the influence such critics wield over the online discourse surrounding a movie, which shapes the public’s attitude towards movie watching into a numbers game instead of an artistic pursuit.

Tyler Is the Demanding Fanboy

At first, it seems like Tyler is the male lead of the movie. He is the clean-cut young man excited to share the experience of dining at Slowik’s restaurant with his girlfriend Margot. But it soon becomes clear that Tyler is obsessed with Slowik’s artistry to an unhealthy degree. He has read and watched everything about Slowik’s culinary career, and that makes Tyler feel a personal connection with Slowik’s food offerings, to the extent that it is revealed that Tyler was willing to bring Margot along as a sacrificial lamb to complete Slowik’s plan of killing his guests.

RELATED: The Menu: Other Movies to Watch if You Loved the Thrilling Horror-Comedy

Here Tyler is acting like the toxic fans that gather around a particular movie or franchise, and start viewing themselves as special members of the audience because they are the ‘real fans.’ Tyler is brutally brought down to earth when Slowik mocks him in front of the other guests and proves that Tyler has no culinary skill of his own. After Tyler kills himself in a fit of humiliation, the artist within Slowik is finally free of the expectations of fanboys to create a truly personal work of art.

Margot Is the Muse

Margot is the date Tyler brings to Slowik’s restaurant in place of his ex-girlfriend. It is soon revealed that Margot is an escort whose real name is Erin. The purpose of Erin in The Menu is twofold. At first, she acts as a stand-in for the general audience, providing an Everyman perspective of the world of the movie for audiences who are unfamiliar with the intricate details of high-class fine dining. Another take on the “general audience” role might be Richard and Anne Liebbrandt. They are wealthy socialites who have been enjoying Slowik’s work for years, but have so little actual regard for it that they have difficulty remembering any of his dishes from previous years.

RELATED: Exclusive: The Menu BTS Clip Has Anya Taylor-Joy and Ralph Fiennes Getting Into Costume

Soon Margot/Erin plays an even bigger role in the grand scheme of things, that of Slowik’s artistic muse. The celebrated chef is fascinated by Erin, and she is responsible for him making several changes to his menu that evening. This echoes how a filmmaker’s personal muse guides their hands while telling a story. In the end, it is once again Erin’s job as a muse to remind Slowik of why he fell in love with his chosen art form in the first place by requesting him to make a simple cheeseburger with love for a hungry guest.

All through The MenuSlowik is slowly putting the pieces in place for creating his finale, a grand culinary artistic achievement. Here something odd happens. His guests, instead of fighting for their lives, happily accept their position as his victims, and seem to almost enjoy being burned alive in the restaurant along with Slowik and his team of chefs to complete the menu. One way to interpret this ending is that the guests have finally become aware that they are characters in a movie being created by Slowik, his great passion project. Perhaps they have accepted that they are in great art, something they’d die for, or perhaps they’ve become the audience, enjoying the final product.

Every movie needs to have a climax, and with every climax comes the end of the story’s characters as they fade back into non-being and out of our imagination. Thus, the guests along with Slowik and his team willingly participate in their own demise to end the movie on a memorable note. The only person left alive is Erin, who is once again acting as an audience surrogate as she watches the other characters die from a distance and leaves the restaurant/theater, thinking deeply about what she had experienced that day.