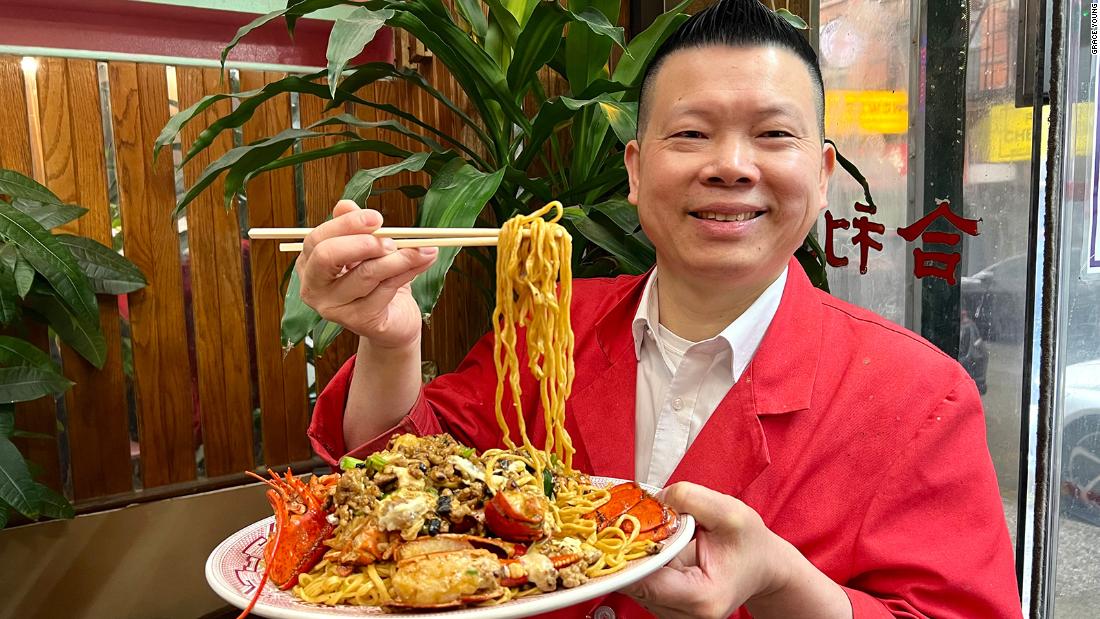 After staring at empty tables for the last two years because of the pandemic, the owner of New York’s Hop Lee restaurant says business is slowly recovering.

Mui joined the 48-year-old Chinatown establishment in 2005 as an employee — after losing everything to Hurricane Katrina in New Orleans — and took over in 2018.

These days, he’s busy talking to suppliers to ensure he’s got all the necessary ingredients to meet the demand for one of Hop Lee’s most popular Lunar New Year dishes: Stir-fried Ginger Scallion Lobster Yi Mein — aka longevity noodles.

“Every Lunar New Year, almost every table would order our longevity noodles,” he says. “Good looking and better tasting, they symbolize luck, too.”

What are longevity noodles?

This year, Lunar New Year falls on January 22, but celebrations occur over several days — collectively referred to as the Spring Festival. Traditional rituals, foods included, are filled with symbolism.

Longevity noodles symbolize long life. According to tradition, the chef can’t cut the noodle strands, and each strand needs to be eaten whole — no breaking it before you eat it.

But that’s where the consensus ends.

Ask people of Chinese heritage which types of noodles should be eaten, and you’ll likely get different answers.

A popular dish in China, longevity noodles might be thick, thin, flat or crispy — but they are always long. In Hong Kong, where the fried e-fu noodle is king, one factory has ramped up production by 30% to meet the demand at Lunar New Year.

At Hop Lee, longevity noodles are synonymous with yi mein, also known as e-fu noodles. These chewy and spongy Cantonese egg wheat strands are dried, deep-fried and consumed all year long, especially on special occasions like birthdays and during the Spring Festival.

Hop Lee’s lobster longevity noodles recipe has been passed down for decades. The yi mein noodles are braised with seasonings and shiitake mushrooms. The lobsters are stir-fried with fermented salted black beans, eggs, minced meats, ginger and scallions.

“Then we put the lobsters on top of the noodles, and the juice trickles down. It’s so delicious. Even my son loves it — he’d ask me to prepare the dish for his school parties,” says Mui.

Over at Xi’an Famous Foods — a humble Flushing, New York City restaurant that in under two decades has swollen into a successful chain serving northwestern Chinese food — CEO Jason Wang has his own view on longevity noodles, which he grew up eating. In his opinion, any noodle that is extended in length counts.

“Our biang biang noodles are definitely among them,” says Wang.

Made with wheat flour and water, the dough is pulled and cut into long, flat and wide belt-like noodles.

“The most traditional way is actually to just put aromatics like scallions and garlic, along with freshly-ground red chili powder on top of the noodles, sear it with vegetable oil and dress it with soy sauce and black rice vinegar. We call these Spicy Hot-Oil Seared Hand-Ripped Noodles,” Wang tells CNN Travel.

Early Chinese immigrants in the United States were predominantly Cantonese, which explains why yi mein is often what many Chinese Americans consider longevity noodles.

But regional cuisines, like dishes from Xi’an, have been popping up and diversifying the options in recent decades.

“Yi mein are Cantonese noodles, so they are different from what we’d eat, but the symbolism of longevity is shared,” says Wang.

“The exact type of noodles varies, but the idea remains ‘long noodles for long life,’ and any long noodles serve that purpose.”

Hong Kong’s Aberdeen Yau Kee Noodle Factoryfounded in the 1950s, is ramping up production ahead of the Spring Festival. During this time of year, the factory’s owner says demand will increase by 20% to 30%.

“We are busiest before Lunar New Year because more parties and gatherings are going on at this time, and people eat e-fu noodles, or longevity noodles, on these occasions,” says Tang Pui-sum, second-generation director of the family business.

As for why e-fu noodles are a popular choice for Cantonese, Tang says it comes down to quality.

“In the Guangdong region, people use e-fu noodles to treat their family and friends on special occasions because they are considered better — it takes more steps to make, and the ingredients are better. It’s also unique because e-fu noodles are deep-fried, which sets them apart from other noodles in northern China.”

The origins of longevity noodles

So now that the issue of what counts as a longevity noodle is settled — short answer: pretty much any noodle as long as it’s, well, long — an important question remains: who decided that eating long noodles can extend one’s life?

Most — if not all — blogs and websites trace the history of longevity noodles back to Emperor Wu of the Han Dynasty (ruling from 141-87 BCE), who told his ministers that he heard that if one had a long face, one would have a long life.

As he couldn’t change the length of his face, the emperor decided to eat long noodles because the word for noodle sounds similar to the word for face in Chinese. The custom then spread beyond the palace to the rest of the country.

We consulted two food historians for their thoughts on the folk tale — and they aren’t buying that story.

“The Han Dynasty was the time when the development of China’s noodle culture flourished,” says Zhao Rongguan, a leading scholar in China who has been writing about Chinese food history and culture for the last four decades.

“It was the era that laid the foundations and techniques of modern-day noodles. But to say that Emperor Wu was why we have longevity noodles, I’d say it’s ridiculous internet heresy.”

Chen Yuanpeng, a professor at Taiwan’s National Dong Hwa University who specializes in the history of Chinese food, decided to consult his colleagues too when asked by CNN Travel to share his take on longevity noodles.

“I called Mr. Wang Renxiang (a Chinese archaeologist who specializes in food culture) and Mr. Naomichi Ishige (a Japanese food historian and anthropologist). Both are Chinese noodle experts; neither know how longevity noodles and the story came about,” says Chen.

Workers remove longevity noodles from racks after they have dried in the sun at a factory in Thailand.

The professor says he spent several days scouring old texts and books. Finally, he found a scripture highlighting the conversation between Emperor Wu and his minister, Dong Fangshuo, in one of the historical Dunhuang bianwen texts — a series of melodic folktales written during the Tang Dynasty (618 to 907) to spread the teachings of Buddhism.

“In the bianwen, the discussion about the length of the face between Emperor Wu and his minister ended without mentioning noodles at all. The correlation between noodles and long life was probably added and fabricated later,” Chen speculates.

“But we can’t dismiss the story — even if it probably was just a myth. It’s been shared so many times that many believe it; it has also become a part of the culture and history of longevity noodles, which has been documented for more than 1,000 years.”

How to eat longevity noodles

Even the ways longevity noodles are consumed vary greatly depending on the location.

When eating longevity noodles, one must take care not to bite or break the strand.

Although Japan follows the Gregorian calendar instead of the Lunar calendar, they, too, have a custom of eating noodles for the new year. Toshikoshi Soba, or year-crossing soba noodles, are eaten on New Year’s Eve for good luck.

“In the northern side of China, some people still follow the old way of eating longevity noodles,” says Zhao.

“When the noodles arrive, the guests would stand up. They’ll pick up some noodles from the bowl, pull them up over their head theatrically with a pair of chopsticks, bring the noodles to their faces and slurp them in one go with a happy face. It’s a way to express their gratitude to the host.”

He adds that long-life noodles should have the length and tenacity to survive a strong chopstick pull.

Why are they so popular in North America?

So now that we’ve established that styles of longevity noodles vary greatly and their back story is murky at best, surely everyone agrees on when they should be eaten?

Nope. While longevity noodles — no matter which type — are a popular Lunar New Year dish among Chinese communities in North America, some argue they aren’t even a traditional Spring Festival food in China.

This shouldn’t come as a surprise, given the sheer size of the country and its many regional cuisines and traditions.

“I don’t think my family would have longevity noodles during Lunar New Year,” says Chen, whose family moved to Taiwan from Tianjin in northern China.

On the other hand, Zhao asserts that noodles are still a popular Lunar New Year custom, especially in northern China.

“Longevity noodles are part of the traditional culture for Chinese celebrations … During the important Lunar New Year festival, we, of course, must have noodles,” he says.

As for why many Chinese Americans mainly associate the tradition with Lunar New Year, Zhao offers this theory: “When people drift away from their ancestral roots, they may not feel their identity for the rest of the year, but during festivals, the love for their culture would explode.

“Often, the degree of continuity and symbolism of one’s culture in a diaspora community would exceed that of the local.”