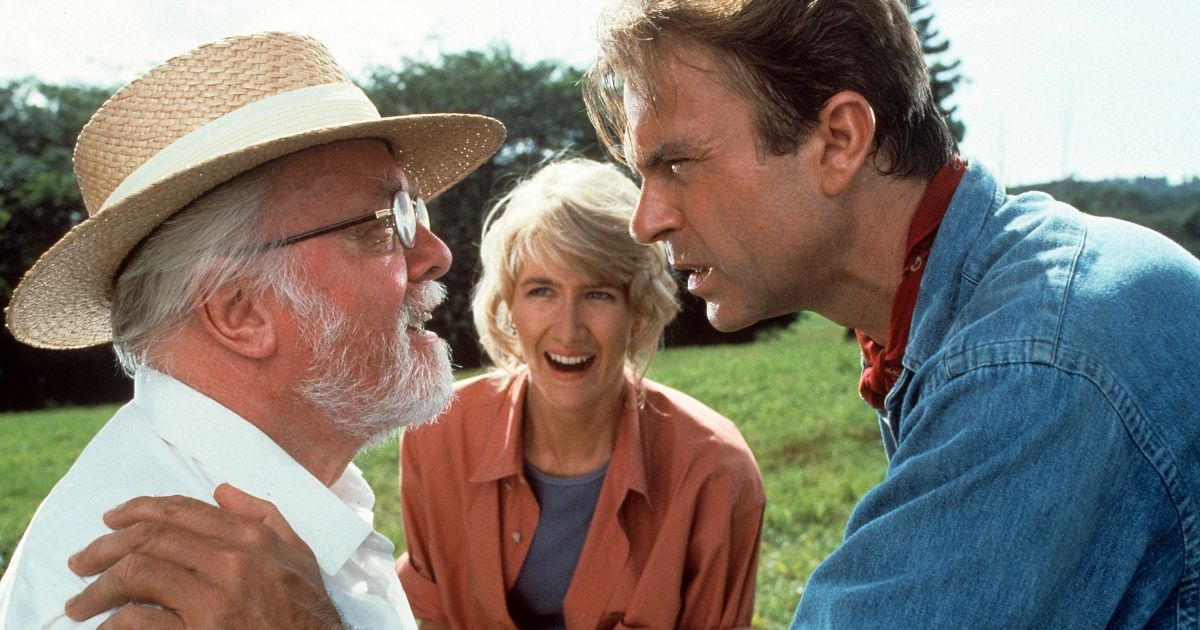 Whether based off a bookpart of a franchise, or even just a stand-alone trying for a memorable moment, there are thousands of films with movie-title-in-the-movie scenes ranging from iconic to ironic.

Here, we’ll be discussing 10 of the absolute cheesiest title drops in film, from least to most corny.

Related: 5 Tropes in Old Sci-Fi Movies About the 21st Century That Proved to Be Wrong

Unlike the rest of the entries on this list, Zombieland‘s title drop comes at the very beginning, during the opening narration. The film takes place in a world that has been overrun by the undead, and is told from the perspective of four survivors fighting their way through it. As our main character, Columbus (played by Jesse Eisenberg), explains the rules of this new world, he tells us that he’s living in “the United States of Zombieland.” Despite the cliché format, this title drop also does a fantastic job of drawing the audience in, explaining both the stakes and the setup, and distracting you from how cheesy the title itself is.

Many of these titles, while plot points in their films, can’t say they were literally assigned to our main character by their boss. That honor goes to 2003 rom-com How to Lose a Guy in 10 Days. This film focuses on Andie Anderson, played by Kate Hudson, a passionate journalist who wants to tackle more hard-hitting topics but is restricted by her job at a women’s magazine writing how-to articles. When her friend Michelle (played by Kathryn Hahn) complains that another guy she’s dating has broken up with her, her boss asks Michelle to write about it, making Michelle uncomfortable. Andie, at first, jumps in to protect her friend, but it gives her an idea. A new article, one that will prove to her boss that she’s capable of more. An article about what not to do in dating. Her boss loves the idea, titling it “How to Lose a Guy in 10 Days.” While certainly one of the more well-integrated movie-title-in-the-movie moments, it’s still very cheesy nonetheless.

Another John Hughes film, Home Alone is a definitive Christmas classic which almost dictates that the characters reference the title, as it is both the name and subject of the film. A young boy, Kevin McCallister, is left behind by his family during their Christmas Vacation and has to defend himself against two burglars (Joe Pesci as Harry and Daniel Stern as Marv) looking to rob his house. Due to this, the title is said a few times throughout its runtime, but the most memorable comes about halfway through.

For the first time in the film, the burglars see past Kevin’s tricks and realize that his family isn’t there. Marv isn’t convinced at first and assumes that if Kevin is home, his parents must be too, but Harry lets him know the truth with a shake of his head and a drop of the film’s title, assuring him that “he’s home alone,” followed by a music sting to really emphasize the corny tone.

Time has taken many film lines once considered powerful and shown a new light on them, revealing a more cheesy tone that audiences might not have noticed when first watching. While Christopher Nolan’s 2008 feature is widely regarded as a cinematic achievement, that doesn’t stop it from having some very cheesy lines – and nothing is more cheesy than ending your film with its title.

Not to give away too much, the ending of The Dark Knight is a speech by Commissioner Gordon, played in this film by Gary Oldman, describing who the Batman is to Gotham City. As we watch the titular caped crusader drive off on his motorcycle, Gordon ends his speech by explaining that the vigilante is “a silent guardian, a watchful protector… a Dark Knight.” The film then cuts to black, a cliché trope in and of itself.

For a film as universally disliked as 2016’s Suicide Squadit seems only fitting that its title drop is just as forced and cliché. This 2016 DC Comics film directed by David Ayer focuses on a group of supervillians being released from prison by Amanda Waller (Viola Davis) to form an unruly team, in order to stop a threat to Earth. A little ways into the film, this is described to them, and Deadshot (Will Smith) asks “So what, we’re some kinda… Suicide Squad?” It’s a tacky line with a lackluster delivery, encompassing the tone of the film as a whole.

Though you could cite title drops in every film in the Lord of the Rings trilogy, Fellowship of the Ring is the cheesiest by far. The quintessential fantasy adventure film, the title is said during the scene where our characters are arguing over who is going to bring the ring to Mordor, and Frodo bravely volunteers. As our eight other members of the team step up alongside him, the group is surveyed by Elrond, who deems the nine companions worthy and declares that they will be known as “The Fellowship of the Ring.” On the nose? Sure. But memorable and iconic nonetheless.

On top of having one of the cheesiest endings ever, this John Hughes classic throws in one of the most famous final lines (and title drops) in a film. The Breakfast Club focuses on five teenagers, with different backgrounds and struggles, learning to understand those who they wouldn’t have before during one Saturday detention. The film ends with Brian (Anthony Michael Hall) narrating the letter that the students co-wrote to their teacher, describing how they’ve escaped their societal boxes and become better people (at least for one day). As the letter ends, the narration lets us know that the letter was signed, “Sincerely yours, The Breakfast Club” as Bender throws his fist up into the air, punctuating both the cheesy ending and the theme of the movie, as that iconic song crescendos.

No stranger to more bizarre rolesNicolas Cage is an actor with the uncanny ability to turn something cheesy and ridiculous into something memorable and entertaining. His role in the 1998 film Face/Offdirected by John Woo, is no different. The film is about two men, homicidal sociopath Castor Troy (Nicolas Cage) and his enemy, FBI special agent Sean Archer (John Travolta) – with Archer going undercover as Troy to find the location of a bomb Troy planted in a major metropolitan area. Just like the title, they do this by removing Archer’s face and replacing it with Troy’s.

Troy then threatens a scientist to put Archer’s face onto his own, and once done, takes over Troy’s life and forces him to stay trapped looking like a famous criminal. This all culminates in a scene where one of Troy’s accomplices asks what “Troy” wants to do to “Archer” when he finally confronts him, to which Archer as Troy replies “I want to take his face… off.” Just to really hammer it home, this movie title drop is both said by Cage’s character and his accomplice, who asks if he really means “His face?” Cage, of course, replies with “off!” It’s one of the silliest scenes in cinema, but like many other Cage films, incredibly fun to watch.

Often, when the title of a film is said in the film, it’s done in one of two ways. The first is a long, dramatic speech that punctuates itself with the film’s title, and the second is with a tagline that stays in audiences minds even after they leave the theater. One of the most famous celebrated examples of the latter comes in the first entry to one of the biggest franchises in the last few decades – Jurassic Park. When our heroes visit a theme park filled with cloned dinosaurs, they can’t believe their eyes at first when they see the majestic creatures in front of them. The creator of the park, however, John Hammond, has expected their wonder, and accentuates it by telling them “Welcome to Jurassic Park.” It’s hard to top it as both one of the most recognizable moments in film history, but also one of the corniest.

While not technically the title of the film itself, it’s important to acknowledge one of the cheesiest movie-title-in-the-movie moments in history. The eighth film in the Star Trek franchise sees our heroes go back in time to stop the cybernetic organisms known as the Borg from changing the past to take over Earth. During the scene where our main crew explains to Doctor Zefram Cochrane (James Cromwell) that he will be the one to make “first contact” with an alien species on Earth, he tries desperately to understand who they are, clarifying that “…you people, you’re all astronauts on some sort of Star Trek.” In a franchise famous for some more corny moments, one would argue nothing is more cliché than that.

Related: The High School Clique Trope – Is it Still Relevant?