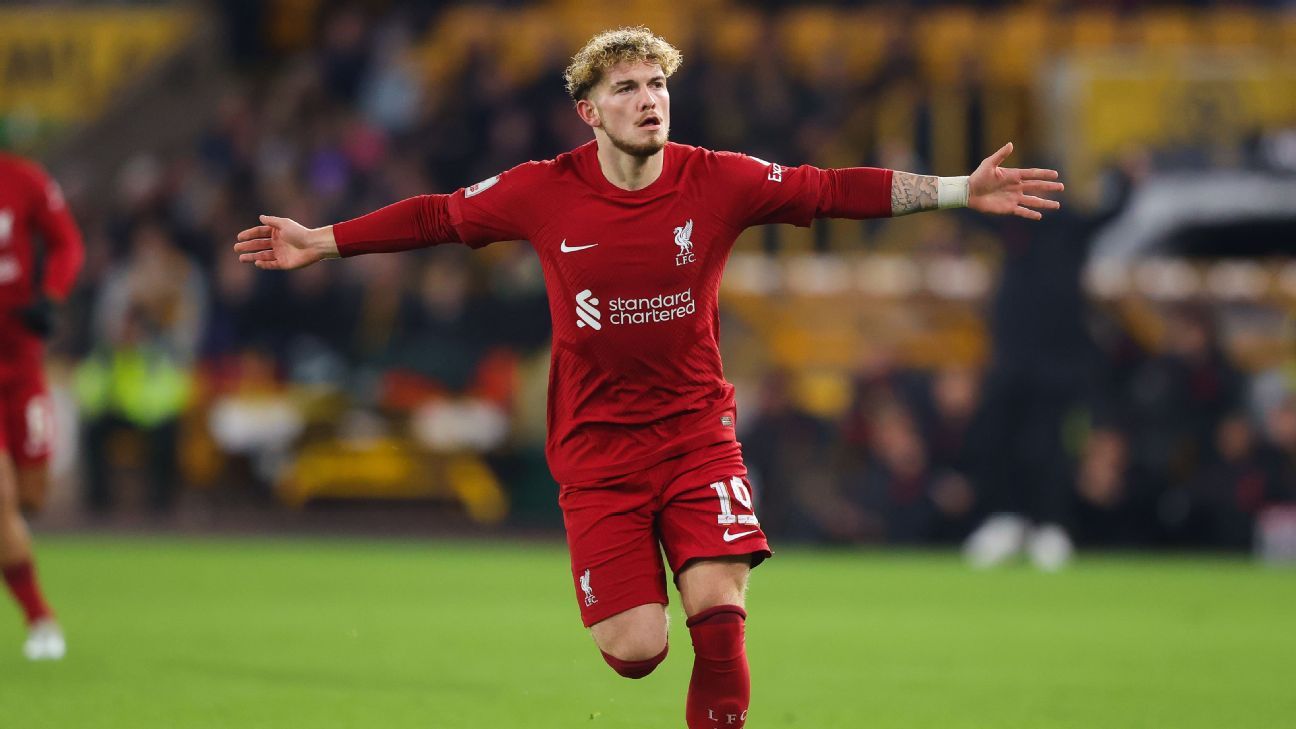 Liverpool booked their place into the fourth round of the FA Cup after securing a 1-0 victory over Wolves at Molineux on Tuesday night.

The visitors made a bright start to the game with Liverpool’s midfield looking much more controlled in their pressing, and they got themselves in front in the 13th minute when Harvey Elliott’s strike from range left goalkeeper Jose Sa with no chance to make the stop.

Both sides struggled to create many meaningful opportunities in a match where Liverpool’s midfield three shined. Ruben Neves had one of Wolves’ best opportunities to score but couldn’t couldn’t convert a free-kick from a promising position, before Joe Gomez intervened to stop Wolves forward Raul Jimenez from getting his effort on target.

A late rally presented Wolves’ Matheus Cunha with a chance that he flashed over the bar, leaving Liverpool, the FA Cup holders, standing firm to earn their first clean sheet in six games.

– Stream on ESPN+: LaLiga, Bundesliga and more (U.S.)
– Read on ESPN+: We’ve entered the era of the midfielder

Liverpool needed a response after a disappointing loss against Brighton over the weekend, and there were obvious signs of improvement on the night. The Reds pressed much better as a team in a performance that saw them much harder to break down.

Manager Jurgen Klopp’s side could have done more in terms of chance creation. Outside of Elliott’s goal from range, the Reds didn’t really create much.

Jurgen Klopp, 7 — A much changed line-up injected energy into the Liverpool side, though many of the players who Klopp handed an opportunity to in this one will have presented him with a selection headache going forward.

GK Kevin Kelleher6 — A quiet opening 45 minutes for the Republic of Ireland international saw Kelleher largely a spectator to start with. Looked to get a hand to a Ruben Neves free-kick in the second half to keep it out of danger.

DF Ibrahima Konate7 — Aggressive in the challenge and didn’t allow much room for Wolves forward Raul Jimenez to operate in, which saw the Mexico international forced to drift wide.

DF Joe Gomez7 — The 25-year-old looked assured when called upon, and was positioned well to react quickly in moments of danger. Switched to right-back in the 66th minute as James Milner was substituted.

DF Konstantinos Tsimikas6 — Tsimikas showed intent when on the ball and looked to carry the ball into offensive areas. He was also active with his overlapping runs down the left-flank, and kept Wolves attacker Adama Traore quiet outside of a couple of occasions.

DF James Milner6 — The 37-year-old worked hard at both ends of the pitch, and kept his opposite number quiet. Not much got down his flank across the 65 minutes he starred in. Replaced by Nat Phillips in the 66th minute.

MF Stefan Bajcetic7 — An encouraging performance from the 18-year-old, who was intelligent with his decision-making while breaking the play up in the middle of the pitch. The Spain youth international looked even better in the second half, making a number of key challenges that helped begin attacks for his side.

MF Thiago8 — Thiago looked to be Liverpool’s brightest midfielder again on the night, with a consistent performance that saw him dictate the play from the midfield.

MF Naby Keita7 — A positive game from Keita in what was his first start of the season. He pressed well from midfield, and often chose the right moments to look to drive with the ball into Wolves territory.

FW Cody Gakpo6 — Gakpo’s brightest performance of his Liverpool career so far. The Netherlands international led the line well for his side, and while he didn’t get on the score sheet, which is surely what Liverpool brought him in to do, he impressed with his hold-up work that saw him bringing others into play.

FW Fabio Carvalho6 — Carvalho looked impressive during spells where he kept things simple, and he was often able to maintain Liverpool’s spells of possession. Substituted for Curtis Jones in the 66th minute.

FW Harvey Elliott8 — A thunderous strike from outside of the box left goalkeeper Jose Sa with no chance. Worked hard to get back to help defend when required.

Mohamed Salah (Gakpo, 65″) 6 — Came on for Gakpo and led the line, but he didn’t really get the chance to make anything happen.

Curtis Jones (Carvalho, 66″) 6 — Often made the right decision in possession and tracked back to deal with the overlapping runs of Nelson Semedo.

Nat Phillips (Milner, 66″) 6 — Gave away a free-kick in a dangerous position shortly after coming on, but it looked as though there wasn’t much contact.

Fabinho (Bajcetic, 75″) N/R — Helped defend out the rest of the game when coming on in place of Bajcetic.