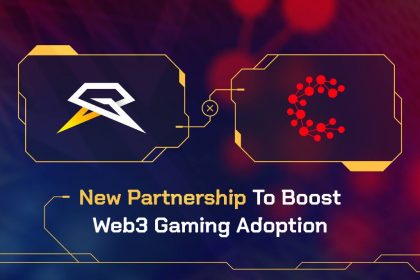 While existing users Casper Network and GameSwift have been enjoying unique offerings from their individual ecosystems, the partnership of both networks will offer additional value that will greatly improve their gaming experience.

GameSwifta Web3.0 gaming ecosystem and infrastructure service provider has announced it has entered into a strategic partnership with Layer-1 blockchain protocol, Casper Network. According to a Press Release shared with Coinspeaker, the partnership is mutually beneficial and will bring a whole new opportunity to users in both communities.

GameSwift has been awarded a grant by the Casper Network, and it will be integrating its infrastructure into the Casper Network. Casper Network is a Proof-of-Stake (PoS) protocol that is specifically designed to power mainstream adoption of some of Web 3.0’s most demanded features.

It has the needed substrate to help scale GameSwift and upon the integration, Casper users and wallet owners can connect to the gaming protocol and gain access to all of its hosted gaming titles.

In the current world of Web 3.0 gaming, there are several intricacies involved including the custody of in-game assets, and the connection to decentralized wallets, all of which to this point have not been made user-friendly. The GameSwift and Casper Network collaboration seeks to resolve some of these key challenges such as wallet connection and all the drudgery associated with accessing and transferring assets to play blockchain games will be automatically eliminated.

With both platforms innovators in the Web3 space in their own rights, the partnership will also see them enjoy technical expertise from each other, especially in the aspect of scaling to onboard the next billion users into the Web3 gaming world.

Casper Is a Perfect Fit for GameSwift

GameSwift as a Web3.0 gaming service provider is composed of four key pillars including Chain, Web3 Infrastructure, Platform, and Gaming Studio. Each of these pillars is crucial to the ecosystem.GameSwift’s original infrastructure facilitates implementing and using blockchain technology for game developers and players.

The protocol is secured by the Polygon Layer-2 network, making its alliance with Casper Network. Casper Network made its debut as one of the most energy-efficient blockchain protocols and with its low energy footprint, it will help GameSwift advance its mission to stay fully Carbon neutral.

While existing users of both Casper Network and GameSwift have been enjoying unique offerings from their individual ecosystems, the partnership of both networks will offer additional value that will greatly improve their gaming experience. New users entering the world of Web 3.0 gaming will also find the integration and its associated capabilities a major improvement in easing the drudgery involved in playing blockchain games, especially, if they have tried other platforms prior to experiencing GameSwift.

Both protocols are committed to maximizing the unique offering of this partnership and will be making further announcements the near term.

Benjamin Godfrey is a blockchain enthusiast and journalists who relish writing about the real life applications of blockchain technology and innovations to drive general acceptance and worldwide integration of the emerging technology. His desires to educate people about cryptocurrencies inspires his contributions to renowned blockchain based media and sites. Benjamin Godfrey is a lover of sports and agriculture.