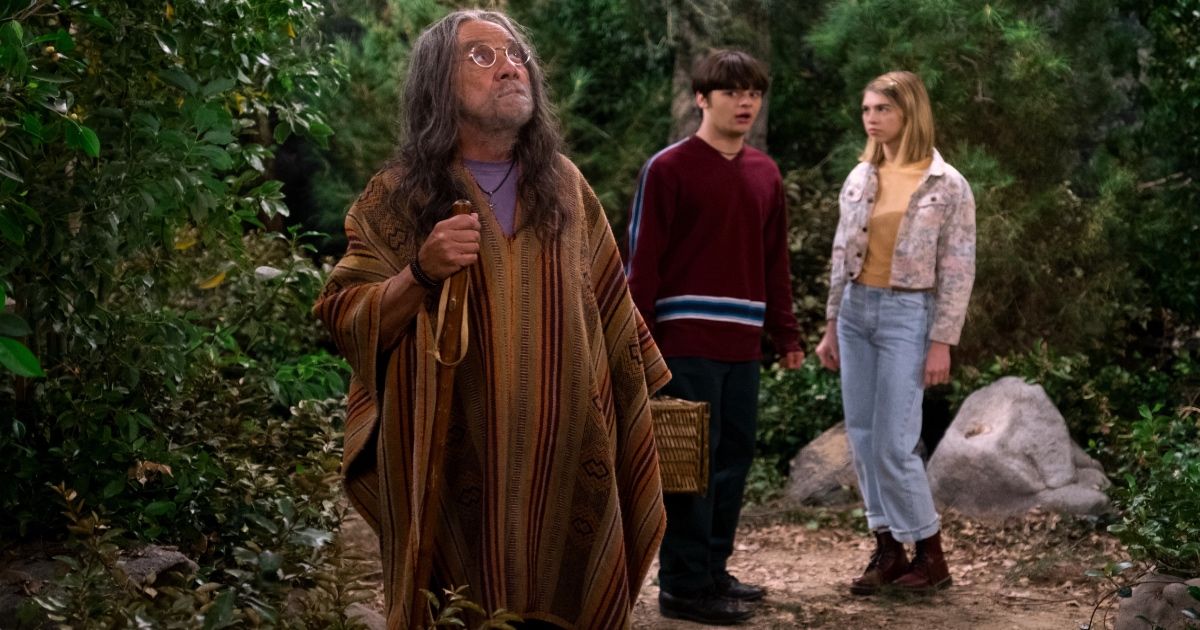 Brace yourself. It’s not time to leave Point Place, Wisconsin. That ’90s Show hits Netflix this week and brings with it all that 1995 had to offer. Apparently, sex, drugs, and rock ’n’ roll never dies, it just changes clothes. The original creators of That ’70s Show, Bonnie Turner and Terry Turner, are back behind the scenes, this time with daughter Lindsey and Gregg Mettler in tow. Iconic executive producers Marcy Carsey and Tom Werner are a vital part of the mix, too.

When Leia meets rebellious next-door-neighbor Gwen (Aufderheide), she soon meets her new gal pal’s posse—brother Nate (Donovan, a scene stealer through and through) his laser-focused girlfriend Nikki (Morelos), the sarcastic and insightful Ozzie (Doi in fine form) and the soon-to-be-hunk Jay (Coronel). Naturally, she convinces her parents to let her stay for the summer. Enter: another basement full of teens.

Expect several surprise guest appearances along the way—the original cast starred, along with Topher and Prepon, Ashton Kutcher, Mila Kunas, Wilmer Valderrama, Danny Masterson, Don Stark, and Tanya Roberts. (You don’t need to take a hit to figure out what stars from the previous show pop up here.) One of them is Leo, the aging hippie Tommy Chong brought to life in the original series.

“I think I have a lot to do with why audiences love That ’70s Show,” Chong kidded with MovieWeb. Sort of/kind of. The Up in Smoke actor went on to say how happy he was to reprise his role in That ’90s Show. He shares more in this exclusive interview.

Why Leo Was Vital to That ’70s Show

MovieWeb: Congratulations to you and the cast for bringing That ’90s Show to life.

Tommy Chong: It was just a breath of fresh air for me [returning as Leo]. I really love that character. Mostly because it’s the character I created in Up in Smoke—it’s just a continuation of that guy. I loved his mindset. But really, it’s the writers. You have to give all the credit to the writers of the show. I’ve made a few attempts to write, you know, like, we did in Up in Smoke. And no, it doesn’t work that way. When you get on real television, you need writers. And the same writer is back in That ’90s Show. I have so much respect for writers.

MovieWeb: What was the best thing about being involved with the original show?

Chong: Toward the end of That ’70s Show, it was like I was taking classes on the show. I started watching “trainers.” You know when the actors would do their bits instead of sitting in the dressing room? I’d come in and monitor the scene and see how the director taught. It was a teaching session. That ’70s Show was a sitcom school. Because all the actors were learning, and the directors were teaching.

MW: What do you think it was about That ’70s Show that audiences truly resonated with? Why did we love it?

Chong: I represent culture that was demonized. Up until That ’70s Showthe whole marijuana thing was sort of demonized. By showing it the way they did it [on the show]I think the show was doing okay, but it wasn’t killing it. Then the powers that be—the brains behind it all—said, “We need something or have somebody that, you know, really says ’60s and ’70s. So, they brought me in, and it got turned around. And it wasn’t so much my performance, as it was the mood, and what I brought to the show. I think what Cheech and Chong did was show everybody that we’re just normal people—everyday people trying to stay abreast with what’s going on in the world. I think that’s what happened [when I came on the show].

MW: So, the original show was a good platform to even some things out, culturally speaking?

Chong: Kids grew up with That ’70s Show. When you’re a kid, it’s a very important time. You’re coming from being a baby. Then you hang out with your friends, and your friends sort of determine what’s hip, what you should wear, what you should do, how you should think. And that’s what happened with that show. The show was great. All the cast became teachers; they were teaching people in America and personally, I think that is a show that has that attitude of teaching—people learning things. How to get through puberty, how to relate to your friends, how to deal with everyday growing-up problems. That ’90s Show is the continuation of that, and I’m sure there will be a That 2000s Show. You know, it’s not going to stop.

MW: There will always be a basement to hang out in.

Chong: Futuristic. You’re in high school, you’re talking about marriage, and you’re still hiding stuff from your parents. It’s about the future.

Chong: Same thing. We peeked into the future with That ’70s Show. And in That ’90s Showwe’re still peeking in. But now, it’s going both ways. Donna and Eric are now parents, yeah, and get the grandparents.

MW: What do you hope people take away from the new show?

Chong: Just hope for the future. I see people get afraid of AI, you know, artificial intelligence. To me, they always look on the dark side. “Oh, that’s going to take over,” or, “you know, you’re going to take our guns.” I think what That ’90s Show has done is that it never stops. Kids are always kids. Parents are always going to be parents and grandparents are going to be grandparents. And it doesn’t matter whether we’re riding spaceships, or we’re riding jalopies. That’s the dynamic of it. And by the way… the character I play has always been there in history—that kind of free-thinking spirit. They had it in Taxi with Jim. They had it in The Honeymooners with Norton (Art Carney), playing opposite Jackie Gleason. And you know, it’s really an honor to play a character like that.