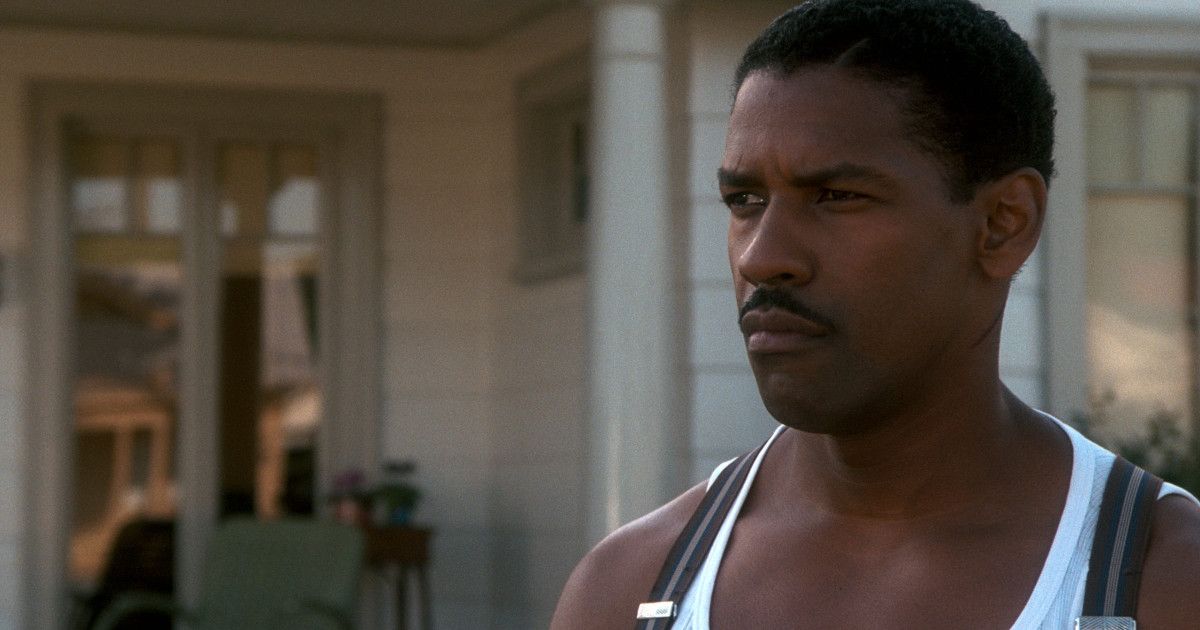 A neo-black mystery film written and directed by Carl Franklin, Devil in a Blue Dress (1995) follows WWII veteran Ezekiel “Easy” Rawlins in the summer of 1948. Played by Denzel Washington, he’s in desperate need of a job and quickly becomes involved in the search for a mysterious woman — the titular devil in a blue dress.

Her name was revealed in the movie’s opening moments, and an almost mythical air materialized within every scene which “Daphne Monet” was mentioned. It was as if she was a folk tale. A mere utterance of her name rendered audiences unsure whether she would truly end up existing as a character, if she was simply a plot device like a McGuffin, if she would break the mythological mold and reveal herself to be true, or even if she’d turn out to be a villain.

Just after the thirty-five-minute mark, Daphne called Easy through his landline and instructed him to meet her in private. A minute of film time later, Easy entered her room and she finally appeared on the screen. Hearing her speak before the audience had a face to match the voice just added to the character’s mystique. Plus, after the audience waited over half an hour to meet the titular character, great suspense was built when Jennifer Beals has a minute-long voice-over as shots of Easy traveling to her location flash across the screen.

An adaptation of a 1990 novel of the same name by Walter Mosley, the film had an almost alarming air of allurement from the start — its music, the darkened color palettes, the soft and subtle camerawork. It all blended perfectly into a neo-noir spectacle for the cinematic ages that should have resonated with audiences as fondly as it did with critics.

As already alluded to, the movie created to tremendous effect a tone reminiscent of American film noirs from the 40s and 50s. Critics shared those sentiments, while also praising Devil in a Blue Dress for its often-dazzling dialogue. If there was anything criticized to an overly harsh degree, it was the plot — the general path in which the story takes to reach its conclusion.

But again, the interactions, the performances of the actors, and the dialogue from Franklin resulted in consistently charming characters whether they were working inside a tantalizing plot or an adequately entertaining sequence of events that ultimately facilitated the more stylistic elements of filmmaking.

Particular acclaim was given to Don Cheadle for his supporting role as “Mouse” Alexander, and it remains perhaps the greatest role of his career nearly thirty years down the line. He essentially carried the film on his back despite roles from more established actors — really, everyone else involved like Washington, Beals, and Sizemore were more well-known than Cheadle. But in spite of those big names, the film just couldn’t get rolling in theaters.

Results at the Box Office

Despite garnering an impressive approval rating of 92% on the review aggregator website Rotten Tomatoes, Devil in a Blue Dress only made $22 million on a $27 million budget. For reference: the top three highest grossing films of 1995 were Apollo 13 (1995) in third place with $355 million grossed, Toy Story (1995) as the runner-up with $363 million, and Die Hard With a Vengeance (1995) on top with $366 million.

At the end of the echelon was Jumanji (1995) in tenth place, and it still made just under $263 million at the worldwide box office. Again: Devil in a Blue Dress only accrued $22 million, total. Thrillers and suspense films don’t usually perform as well as action/adventure, comedies, or dramas, but they’re still ahead of genres such as horror and westerns when it comes to average worldwide gross.

Unfortunately for Franklin and his crew, 1995 in film was saturated with franchise installments like GoldenEye (1995), an entry in the James Bond film seriesalong with Batman Forever (1995) by Joel Schumacher and the aforementioned Die Hard With a Vengeance.

What’s more is that Devil in a Blue Dress released in theaters just one week after it’s most prominent competitor: Se7en (1995). The films aren’t overly similar in style, but they do fall within the same genre — and even subgenres — of crime, mystery, and suspense. And as it turned out, Seven was one of the most critically and commercially successful films of its genre from throughout the entire decade.

While there’s an argument that Se7en is classified as a thriller, the elements of crime, mystery, and suspense are prevalent in both projects nonetheless. Genre lines are fine, but the difference in box office numbers are not. Directed by David Fincher, Se7en made $327 million off a $34 million budget, rendering it among the ten highest grossing movies of 1995. And at this point, it’s clear how poorly Carl Franklin’s film performed commercially in comparison.

The Film’s Success in Retrospect

Nowadays, thanks to its keen directorial style and indelible performances, Devil in a Blue Dress is often discussed among film fans and critics as one of the most underrated films of the 90s. This is in large part due to the film’s lack of revenue, but also the other neo-noir mystery films of its era that ultimately left it in their wake.

Several movies that are loved today went under the commercial radar upon release. There are even films of the neo-noir ilk that are highly regarded today but technically flopped in theaters: Fight Club (1999) by David Fincher and Mulholland Drive (2001) by David Lynch, for example. Both of those projects just barely made their money back at the box office, but still underperformed enough to fit the definition of a box office bomb.

Ultimately, though, respective results in theaters are by no means indicative of the quality of a given film. Devil in a Blue Dress was never going to be catered towards families, like Toy Story (1995) for instance. One of the year’s highest-grossing products. But it also wasn’t part of a major franchise like Die Hardnor did it feature a newsworthy plot twist like Se7en. It was doomed from the start with regard to commercial success, but in terms of overall quality, Devil in a Blue Dress is up there as one of the year’s absolute best.