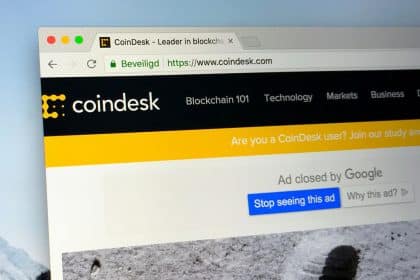 DCG is currently looking for ways to save its business and grow its capital.

Crypto-based firm CoinDesk has begun weighing its options regarding a potential sale as it looks to attract growth capital. According to the WSJthe firm has recently received offers above $200 million. And if the deal goes through, that would amount to an almost 40,000% return on its initial investment. Recall that Digital Currency Group – CoinDesk’s parent company, acquired the firm for an amount between $500,000 to $600,000 in 2016.

Despite the offer, however, CoinDesk is now seeking advice from Lazard, a specialist firm focused on mergers and restructuring.

Recently, several reports have surfaced about DCG having liquidity issues. So much so, that on January 17, the group itself announced to its shareholders that it would halt dividends immediately. In its explanation, DCG claimed that the decision was to help it improve its balance sheet and ultimately “preserve liquidity.”

In another related headline, Bloomberg reported less than 24 hours ago that another DCG subsidiary, crypto lender Genesis Global, may be planning to file for bankruptcy as well. Genesis reportedly owes its creditors over $3 billion. Considering such a huge amount of debt, it is not exactly surprising that DCG is now actively looking for ways to save its business.

About the potential sale, CoinDesk CEO Kevin Worth says it must be done right and that’s why the firm is employing the services of investment professionals such as Lazard. Worth said in part:

“My goal in hiring Lazard is to explore various options to attract growth capital to the CoinDesk business, which may include a partial or full sale.”

According to DCG’s website, the group has about 200 crypto-based businesses under its venture capital scheme. Some other popular firms owned by DCG include crypto exchange Luno and asset management firm Grayscale Investments.

For what it’s worth,  there’s a popular opinion that CoinDesk’s expose on Alameda Research’s balance sheet in November may have been the beginning of the end for the FTX exchange. But there’s a more interesting twist to that story. The same FTX collapse is also now responsible for the liquidity issues currently being faced by Genesis and DCG, and the broader crypto market.

Mayowa is a crypto enthusiast/writer whose conversational character is quite evident in his style of writing. He strongly believes in the potential of digital assets and takes every opportunity to reiterate this.
He’s a reader, a researcher, an astute speaker, and also a budding entrepreneur.
Away from crypto however, Mayowa’s fancied distractions include soccer or discussing world politics.