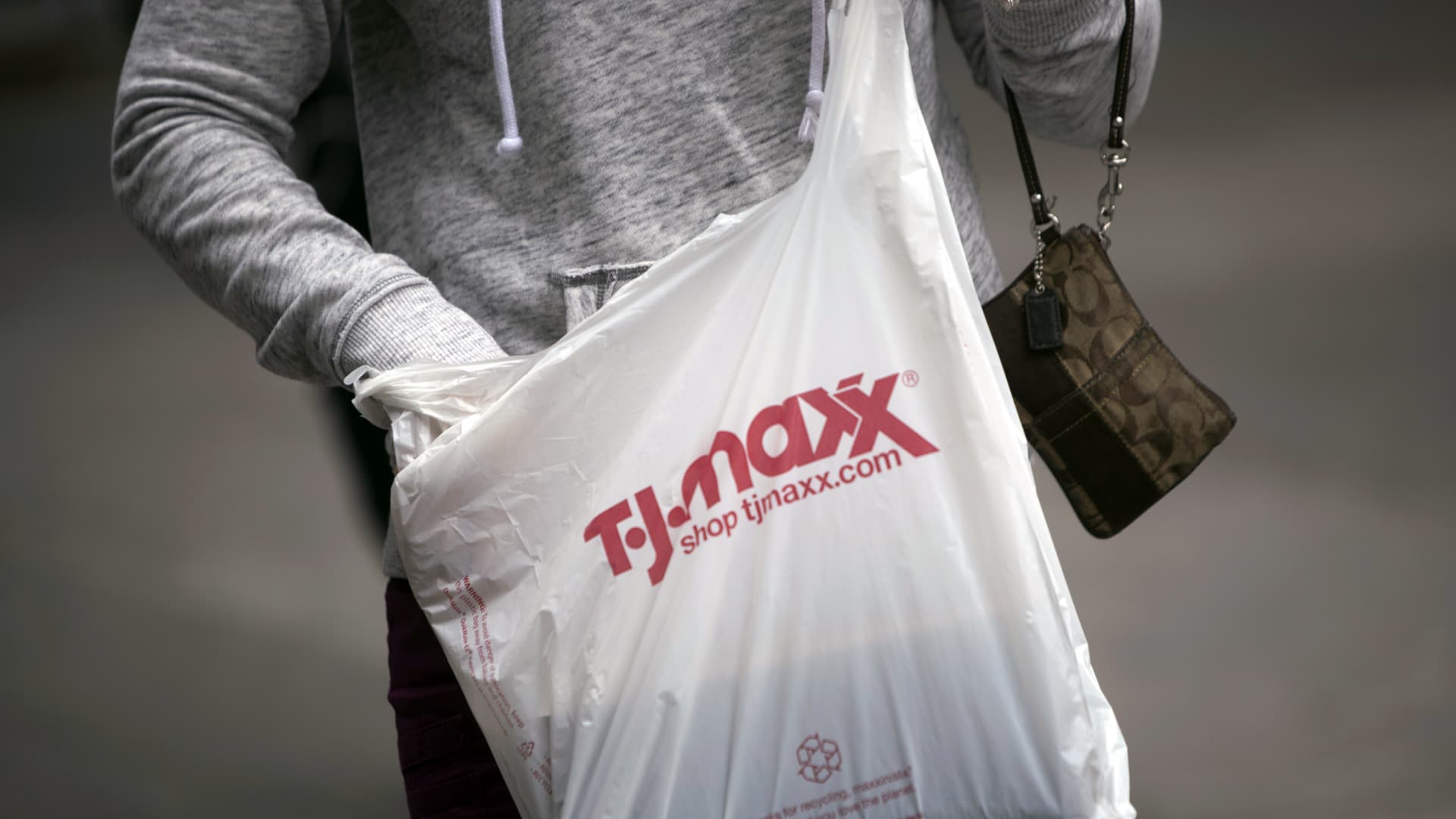 Fresh economic data Wednesday showed U.S. consumer spending slowed during the holiday season as inflation, though easing, continued to squeeze shoppers. That’s likely to make off-price retailers like Club holding TJX Companies (TJX) even more attractive to many Americans looking for cost-saving deals in the new year. Total retail sales in the U.S. dropped 1.1% in December month-on-month, the Commerce Department said Wednesday, in the second consecutive monthly decline. Retail sales had fallen by 1% in November. The monthly sales report, which is not adjusted for inflation, showed declines across a range of categories, with a steep drop of 6.6% in department-store sales and a 4.6% fall in sales at gasoline stations. The retail data comes as the Labor Department’s producer price index, also released Wednesday, showed prices of wholesale goods and services came down at a faster rate than expected in December. That’s a sign the Federal Reserve’s interest rate hikes are working to slow inflation, which could benefit consumers. But with the state of the economy still uncertain — inflation remains high, even as fears of a recession persist — Morgan Stanley on Wednesday highlighted off-price retailers like TJX and competitors Ross Stores (ROST) and Burlington Stores (BURL) for their “defensive qualities in the face of recession.” Companies like TJX, which operates stores like T.J. Maxx and Marshalls, have benefited from a retail inventory glut that’s plagued major department stores over the past year, buying up excess apparel and other items at a discount then passed onto shoppers. Morgan Stanley analysts expect off-price retailers to benefit from consumers shifting spending habits away from high-end shopping toward discounts. “Looking into 2023, we think TJX, ROST & BURL’s businesses should benefit from trade down once again, as well as see margin tailwinds on normalizing freight costs & [merchandise] margins, creating an attractive setup for the sub-sector in a potentially challenging macro environment,” the analysts wrote in a research note. The analysts singled out TJX as the only off-price retailer to successfully raise prices over the last couple years, helped by their more than 20,000 vendor partners, while also attracting a higher-income demographic compared to competitors. Shares of TJX closed down 2.13% Wednesday, at $79.81 apiece. Bottom line A second consecutive monthly drop in retail sales shows that shoppers are increasingly careful about how and where they spend their hard-earned dollars. This trend could be foreshadowing slower growth in upcoming retail earnings for the first quarter. At the same time, if inflation continues to moderate, it could create space for more discretionary spending. But for the moment, inflation is still a challenge for many consumers, even as the economy slows. This positions TJX to be a preferred shopping destination during a potential economic downturn. Off-price retailers like TJX have a great opportunity to snag a wide range of merchandise from big-box retailers with elevated inventory for very cheap prices. They can then sell items quickly, which allows for quick product turnover and a boost to their top lines. TJX also offers a dividend yield of 1.44% to shareholders, sweetening our investment case. TJX is set to report its fiscal fourth-quarter earnings on Feb. 22. (Jim Cramer’s Charitable Trust is long TJX. See here for a full list of the stocks.) As a subscriber to the CNBC Investing Club with Jim Cramer, you will receive a trade alert before Jim makes a trade. Jim waits 45 minutes after sending a trade alert before buying or selling a stock in his charitable trust’s portfolio. If Jim has talked about a stock on CNBC TV, he waits 72 hours after issuing the trade alert before executing the trade. THE ABOVE INVESTING CLUB INFORMATION IS SUBJECT TO OUR TERMS AND CONDITIONS AND PRIVACY POLICY , TOGETHER WITH OUR DISCLAIMER . NO FIDUCIARY OBLIGATION OR DUTY EXISTS, OR IS CREATED, BY VIRTUE OF YOUR RECEIPT OF ANY INFORMATION PROVIDED IN CONNECTION WITH THE INVESTING CLUB. NO SPECIFIC OUTCOME OR PROFIT IS GUARANTEED.

A shopper carries a bag outside a TJ Maxx store in New York, U.S.